Benefits of using the “wrong” hand

This is a simple trick to make life a little more interesting, and challenge your body and brain in a new way.

The next time you brush your teeth (I do harp on a bit about how much you can do while brushing your teeth, don’t I? Note to self: broaden range of examples!), try doing it with your bad hand. For the right-handers out there this means using your left hand, and for the south paws you need to use your right. If you’re a while away from teeth brushing time, try switching your computer mouse to the wrong side and using it, or if you’re reading on your phone, scroll around with the digits of the opposite hand. What do you notice?

If you’re anything like most people, teeth brushing gets instantly harder. It’s amazing to see how clumsy and awkward you can get at such a simple task. I have a hard time keeping my head still; it appears to want to take up the slack and moves around to compensate for the laboured movements of my left hand. This makes it even harder to get the action right and angle the brush correctly. It even gets more difficult to regulate how much force you’re applying–and I use an electric swivel-headed toothbrush most of the time, so this shouldn’t be so tough!

When it comes to using my mouse left-handed, I have to constantly return my right hand to the keyboard when I go to move the cursor, remind myself what I’m doing and then extend my left hand out to the mouse. Moving the cursor to the correct location requires actual effort rather than the extension of my mind that mouse movement usually is. Accuracy goes out the window. Then working out which button is the correct one to click takes a noticeable length of time longer than normal. It’s easy to accidentally click with your index finger, even though that is now a right click. That sounds complicated, but it’s the steps my brain has to take in order to achieve the same goal!

Alright, so things get more difficult, so what? Not exactly a surprise is it? So why should you try this, beyond wanting to look even more ridiculous while brushing?

It turns out that there are a number of benefits to working your non-dominant side that make this a worthwhile experiment.

1. It forces us to think

Our brains, like our bodies, get weaker if we don’t push them. If we keep plodding down the same old well-worn neural pathways over and over again in most areas of life, chances are we’re going to do so in others, and we aren’t going to force our brains to adapt and get stronger and smarter. Just like if you were to do the same gym workout over and over again without ever increasing the difficulty, you’re going to stop seeing results and even backslide a little as you get better at doing the same things, allowing your body and brain to get lazy about it.

By using our non-dominant hands (and feet), we can force ourselves to look at things in a new way, and be more conscious of the action. It’s tricky to reverse complicated movements for our opposite side, and that’s a good workout for our brains. Depending on the movement, it can also be good for our bodies! Speaking of which…

2. It balances out our bodies

Most of us have some imbalances in our physiques from left to right. These aren’t usually desirable (except in some rare athletic cases), often resulting in postural problems and various other ailments that can be avoided with some balancing out. While it’s not necessarily true that something low-impact like brushing your teeth with the same hand every day is causing a muscular imbalance, more complex actions might well be. If you always use your mouse with your right hand, does that cause you to lean a certain way in your chair most of the time? Do you always sleep on the same shoulder? Shift your weight to the same foot?

Just like with higher-energy exercise like weight lifting, it’s worth paying attention to how balanced you are in your everyday movements. They may well be impacting you more than you realise now. After years of compounding though, I imagine we might all show the effects. 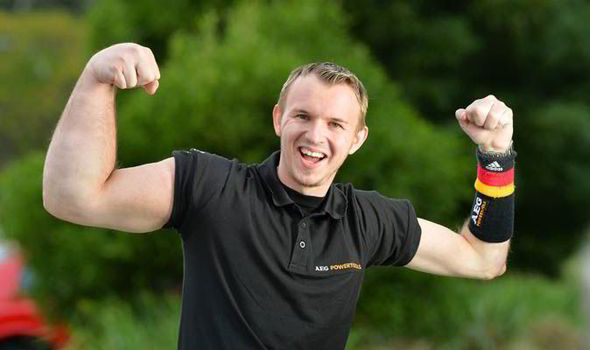 If you are arm-wrestling champion Matthias Schlitte, you are allowed to be a little imbalanced

3. It can help us be more open-minded

Using our non-dominant appendages more also appears to have some carryover to how open-minded a person is. Studies show that we tend to favour things on our dominant side (how mad does that sound!?), often making choices influenced by this without us even being aware of it. A Stanford University experiment by David Casasanto asked people to make decisions on hiring personnel based on brief descriptions of each individual, with them then arranged at random into right and left columns. Participants were more than twice as likely to choose candidates from the column on their dominant side.

It’s mind blowing to think you might choose a less-healthy restaurant meal because it’s on the dominant side of the menu. I wonder are marketers taking advantage of this to sell more expensive items?

4. It can improve creativity

Our brains operate in two hemispheres. Though it’s not really true to say you can be left-brained or right-brained–everyone is a mix of both–there is compelling research to suggest that you can improve the usage of both hemispheres, forging new and stronger connections between them, by attempting complicated movements with your non-dominant side. Research on musicians that use both hands shows a 9% increase in the size of the corpus callosum–the part of the brain that connects the two halves. Better connections mean better ability to use both halves of your brain and especially to use them in tandem.

Use of the non-dominant hand also increases the amount by which the non-dominant brain hemisphere is activated, much more so than using the dominant hand. This is strongly correlated with improved levels of creativity, intuition and ability to feel. That’s good stuff we can all do with more of. As BrainPickings.org (a wonderful site) pointed out, musicians have notably awesome brains; could this be a reason?

If you’d like to try doing some everyday actions with the “wrong” hand to try this out, here are a few that you can start with. Feel free to experiment, and please share what you come up with!